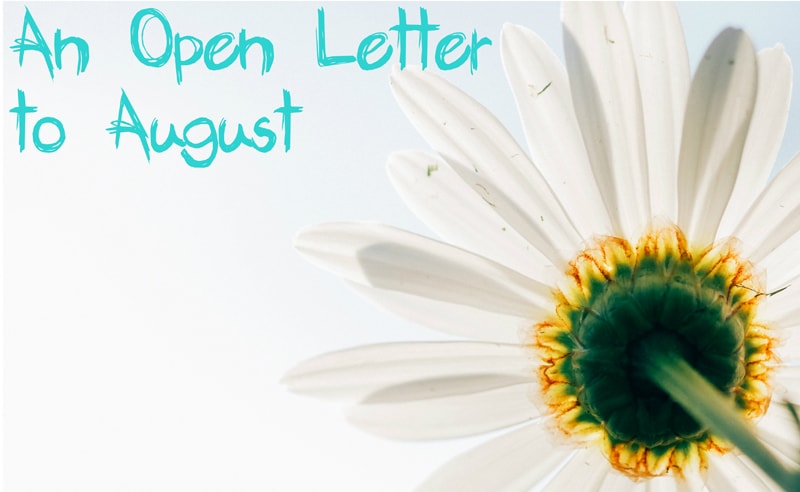 An Open Letter to August

I wanted to write you a letter today to tell you just what I feel about you, in case you hadn’t figured it out already. You are full up with 31 days, which is one more than four of those other months, but the same as six of your peers.

(We won’t talk about February; he’s kind of a different chap altogether.)

I have mixed emotions as you begin to wind down this year; I think that’s called feeling bittersweet. The reason for these feelings is because there are things about you that I both love and hate.

Let’s get the unsavory things out of the way first, okay? To be honest, I don’t care for the fact that by your last week, my calendar for the remaining four months has already begun filling up with an exhausting mix of events, commitments, and meetings. It’s enough to drive me to drink more than one Pepsi a day!

I don’t like that it’s the calm before the holiday storm, and folks are already complaining about the decorations being put out for the upcoming celebratory events before we even get to September. (Poor old September, he gets ignored quite a bit in favor of lively October.) And, not to belabor the point, but I really don’t like that the stores start putting out fall and winter clothes when it’s still 100 very hot degrees outside.

However, there are things I love about you, sweet and sunny August. I love still getting to eat juicy watermelon with my meals. I love that the first few weeks are still a part of summer, and we can still swim, picnic, and play outside. I love that I get to start shopping for school supplies (Remember, I’m a former teacher; it’s in my blood!), and stack them nice and neat in piles for that day when the kids must return to the classroom. I really, really LOVE that the sun starts to set just a bit earlier allowing me to feel like going to bed at 8:30pm is not too early for this tired young-but-not-that-young body.

You see, my little one was suppose to be born in early September, however, fire cracker that she is, she decided her entrance needed to come a little bit early and changed months altogether. When she was born, everything I thought I knew about myself changed, everything I had planned for my next months and years changed. When she was born dear August, my heart grew bigger and I knew that I would never look at you the same.

You see, I’ve had to learn more patience with everyone, including myself.

I’ve had to learn to cast all my fears on the Lord even more because my worry-meter can sometimes climb off the charts.

I’ve had to learn it’s okay to take a nap in the middle of the day.

I’ve had to learn that my house does not have to be immaculate for friends and family to come over.

I’ve learned that getting your hands dirty planting flowers can actually be fun, even when you have no green thumb.

I’ve learned that having a picky eater isn’t the worst thing in the world…and neither is potty training (but, Thank You Baby Jesus, we are through that phase!).

I’ve learned that being a mom isn’t about having all the answers.

It’s about hugs and kisses, play time and quiet time, scraped knees and flying elbows, pillow fights and movie nights, being together and sometimes being apart.

So, yes, August, you have officially taken on a different meaning for me. And, yes, I will probably always view you with bittersweet emotion as you arrive and as you leave each year.

But, mostly August, I want to thank you for changing my life forever and bringing me joy unspeakable. She is everything God knew I needed, and I’m so glad we get to celebrate her together each year!